Have you ever wondered why your Wi-Fi is so bad?

This is from a hotel I stayed in recently, a Four Points Sheridan, the wireless was one of the worst I had ever experienced.  Take note that each archway represents an Access Point transmitting inside a designated 2.4 GHz channel.

When I first saw this, I thought to myself WOW why would anybody do this? Next, I stopped to actually consider that question.  In reality, I understand why this gets done.

Many of us were thrust kicking and screaming into wireless from the wired access layer side of networking.  On wired networks, there are no channels just ports and these days all ports are switched which means there is isolation between ports, one user generally does not affect other users. This is simply not the case with wireless. Well not entirely the case.

Let’s look at a little history,  the 2.4 GHz band has a sorted and frustrating past. You see it all started with simple technology designed to help make communications more reliable and less susceptible to interference and noise. This technology was in use everywhere. Namely spread spectrum and serial communications, DSSS (Direct-Sequence Spread Spectrum) to be more precise.  The 802.11b standard defined a system that efficiently used the rather limited and narrow ISM (industrial, Scientific and Medical) unlicensed spectrum.  When 802.11b was the standard the above configuration actually worked pretty well.

For 802.11b there are 11 usable channels in the US, and more in other countries.  The biggest consideration was that DSSS was serial communications.  DSSS is a technology where a station uses one frequency to transmit for a short period of time then hops or sequences to another frequency for the next period of time. This technology gives noise survivability and reliability y not dwelling too long on any channel that may be suffering from a lot of interference.

To understand this further, we need to explore what is inside of a channel. Each designated channel is made up of multiple carrier frequencies. Think about it like this: on your car radio you could say there are two channels, an AM channel and an FM channel. The each channel is made up of standard radio carriers onto which the radio stations place signals. Each station can operate within the boundaries of a given transmitter frequency and multiple stations can transmit their message at the same time with no interference. Two stations can even transmit on the same frequency as long as they don’t do it at the same time, there will be no interference. But if two stations transmit on the same frequency at the same time then the two signals will collide and cause some unpredictable behavior or interference.

OK so how does the FM radio example relate to Wi-Fi?  OK while 802.11b does differ from radio in that for radio, all stations share the same channel (FM or AM) and in Wi-Fi each access point gets its own channel but like radio if two stations transmit on the same channel at the same time their signals will crush each other and turn into something that cannot be properly received.  Go back and look at the image of the Four-Points network.

What do you notice about the archways for each channel?  They overlap and each archway represents a designated group of carrier frequencies. This means that some of the frequencies assigned to channel 1 are also assigned to channel 2 and the same for all of the channels. There is no way that you can be on channel 2 and not share some of the carrier frequencies with channel 1 and 3. But when this standard was established that was ok.

Lets go back to the combination of DSSS and serial communications. Each Access Point only used one frequency at a time and was constantly hoping between the designated frequencies for its channel. If on a rare chance two Access Points attempted to transmit on the same frequency at the same time the data would collide and error out. The two access points will simply change frequencies and retry the data again.  For what the technology was at the time it was a brilliant way to cram more channels into a smaller spectrum. For 802.11b it worked. Having multiple channels available gave Wi-Fi extra capacity by allowing more access points to be transmitting at the same time.

Now fast forward to 802.11g which also uses the 2.4 GHz spectrum but, changed DSSS and serial to OFDM and parallel communications.  Consider that our FM radio station example only works because each FM station only transmits on a single frequency. What would happen if a radio station were to transmit on many frequencies at the same time?  First, they would potentially be able to send more information at the same time but any overlapping stations would defiantly interfere with other stations trying to use the same frequencies.

When 802.11g was developed as a standard it used the same 802.11b channels but changed the way it used those channels. Where DSSS uses one frequency at a time OFDM uses them all at once. The idea is that by turning the channel into a parallel buss you can move more bits of data through the air faster. Each time data is clocked or sent instead of sending 1 bit (serial) at a time OFDM sends multiple bits (parallel) at a time, spread across the carrier frequencies. It is easy to see you can move more data faster over parallel when the clock rate is the same.

In the end, we opted for data rate over number of channels. OFDM became the standard for 802.11g, 802.11a and moving forward. What this means for our channels is that there can no longer be any overlap in the frequencies used inside the channel. When there is overlap between channels there will always be a collision of data when more than one device transmits, it will always happen.  This is because OFDM sends a data signal on every frequency inside the channel at the same time.

When you have an access point set for channel 1 and another set for channel 2 they will share a number of frequencies thus only one device can transmit at a time on either channel. Instead of gaining extra capacity by having the ability to support more simultaneous transmissions you actually loose capacity due to lost time recovering from collisions in data. This comes in the form of retries or having to transmit the same data over and over.

With the ISM or 2.4 GHz channels the solution is to use channels 1, 6 and 11 in the United States. The reason is simply that none of these channels share common carrier frequencies. This is fine when the error is self-inflicted,  the Four-Points is for the most part doing this to itself just change the channels you are using. But what about when your neighbor’s business is doing this?  It actually does effect your network if they are within range of your access points. in the end we share the same radio channels even if we are not on the same network.

I started this with the Question “Have you ever wondered why your Wi-Fi is so bad?”  while the above explains only one mistake made due to lack of Wi-Fi Fu, there are really tons of little details that make the difference between fast and reliable Wi-Fi networks and Wi-Fi that makes us suffer to be connected. 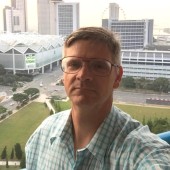 I have been an IT professional since the early 1990s, Since 2010 I am a trainer for Aruba Networks. Over the years I have seen the industry change and each change creates opportunity. As a trainer my goal is to help you seize those opportunities.

Authentication and Authorization in Two Layers